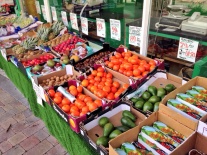 You don’t have to walk far down Bristol’s Gloucester road to come across a well stocked and thankfully busy greengrocers. Piles of fresh fruit and veg that smell inviting and look as they should…. And buy this I mean ripe and individual. Uniformity isn’t something I’ve ever really needed in my fruit and veg even though that’s often what you get on supermarket shelves. Uniformity that inevitably ends up in more food waste than any of us would believe or care to acknowledge. I’m not simply blaming the supermarkets, it’s also down to the fact that people often shy away from things that are a little different. Maybe our own narrow-mindedness has resulted in a culture of bland, which we just end up accepting. 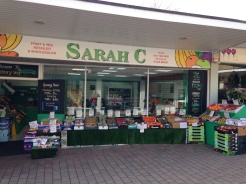 So on the hunt for flavour and individuality, I cycled to Westbury-On-Trym to fellow Thornbury bred Castle School alumni Sarah Conibere’s fruit and veg shop simply called ‘Sarah C’. Sarah has been providing fresh produce to the great and the good of Bristol’s restaurant trade for many years and has recently taken over and given a fresh look to an existing shop in the heart of Westbury village. The trip was well worth it to see all the seasonal produce on offer. The best clementines in town can be bought there and I urge anybody to go and taste for yourself.

So when BBC Radio Bristol’s Laura Rawlings asked me what I wanted to talk about on my recent appearance on her fantastic drivetime show, I wanted to talk fresh fruit and veg. Don’t get me wrong, yes I buy fruit and veg at the supermarket as well as in a greengrocers – Let’s face it, it’s the convenient option and when you live so close to big supermarkets like I do, it’s often very easy to be sucked in by their draw. So this week I was very pleased to hear about the introduction of the wonky veg box in Asda stores.

Knobbly and wonky shaped fruit and veg have been recently championed by Channel 4’s ‘Jamie and Jimmy’s Friday Night Feast’ which has arguably brought it to our consciousness. Apparently 15% of potatoes don’t make the shelf because they’re too big, too small or blemished and 15% of parsnips are not put on sale because they’re odd shaped or have similar defects. 10% of onions and 8% of carrots suffer the same problem.

So now family-sized wonky produce filled boxes are now on sale nationwide. £3.50 will buy you a 5kg box of mixed produce which is apparently enough to feed a family of four for a working week. It also works out 30% cheaper than standard lines. It also means that there will be less waste in the process of getting from farm to plate. 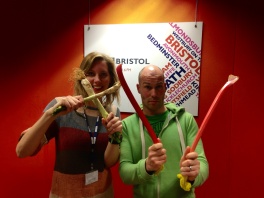 I tried to get my hands on a box before my appearance on Laura’s show but they have proved so popular that both branches of Asda I tried (Cribbs Causeway and Bedminster) had sold out. At least it shows that we, the Great British public are interested! But I couldn’t turn up to the studio empty handed, so it was while having lunch at Lido Bristol that I was chatting to my mate, Head Chef and all round great guy Freddy Bird that we had a brainwave about my upcoming appearance. Before I could digest my Iberico pork, I was in Lido’s walk in fridge being given a box of beautiful ingredients including fresh rhubarb from Yorkshire, calçots from Catalonia, a beautifully ugly celeriac, a hispi cabbage and one of my favourite ingredients of all: A blood orange. So, I decided to take them into the studio and see what fellow foodie Laura would make of them.

As well talking veg we briefly talked about some of the food judging I’m lucky enough to do. It was great to be back in the studio but unfortunately there’s never enough time to say all the things I’d like to say (And sorry to the ‘Saturday Kitchen’ team as I didn’t have time to plug this week’s show!)…. But then some say I talk too much anyway!

Check out our chat here: http://www.bbc.co.uk/programmes/p03h9hvv#play (It’s the final 15 minutes of the show) 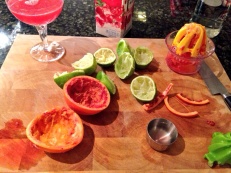 ’m very pleased to say that Laura took such an interest in the produce I sent her off with the calçots and the celeriac and I can’t wait to hear about what she’s going to cook with them! The rhubarb is to become a crumble tonight (thanks to a recipe from Pete Lawrence’s recently published Allotment Cookbook) and while the cabbage will live to fight another day, the blood orange helped make a couple of tangy rounds of Cosmopolitans last night!… Well, surely the orange coupled with all that fresh lime and cranberry juice makes for at least one my 5 a day?… I’m not sure the same can be said about the Vodka and Cointreau though.