As a kid I was never that fond of a roast dinner, I only ever ate mine all chopped up and swimming in gravy. Maybe I just preferred something that resembled boeuf Bourguignon rather than a traditional roast with all the trimmings! Things change as you approach 40 (but let’s not dwell on that!) and I get over excited at any classic roast or one pot wonder. At Easter, I still love the chocolate as much as I did when I was young but I now spend much more time appreciating the Easter Sunday lunch. 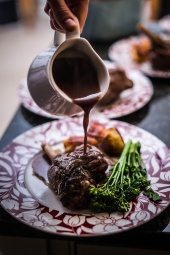 Lamb shanks have always been a favourite in our house but we haven’t cooked them for ages, so I’ve decided to put them back on the menu. So with the Aga now well and truly mastered I’ve created a recipe, which is perfect for Easter Sunday lunch. Slow coking means that you can spend your time doing an Easter egg hunt or indeed choosing the wine. The recipe involves all the usual suspects; rosemary, garlic and red wine b 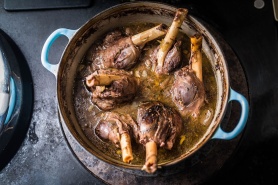 ut also includes anchovies in a jar. If you give the recipe a go please don’t omit the anchovies. I’m not a huge fan of eating them straight out of the jar but I promise you, you won’t notice they’re there (they certainly won’t make the lamb fishy) they will just add a depth of flavour and a savoury note you’ll love. And if in doubt, just don’t tell your guests they’re in there!… (Unless your guests are allergic of course!)

And of course, the wine match has to be right – So I’ve got a Spanish treat that will leave you all wanting more. It’s a bargainous beauty from northern Spain. In the foothills of the Sierra de la

Virgen mountain range, La Niña Roja, or ‘The Red Girl’ is supposed to look down and bring good ofortune to the wine growers below. And it seems she’s doing a good job because The Gran Reserva 2007 is sensational at the price. It’s a blend of 60% Cabernet Sauvignon,30% Tempranillo and 10% Garnacha which is aged for a minimum of 5 years (spending 24 months of that time in barrels.) It’s slightly smoky, spicy nose with a hint of vanilla is inviting and elegant while the juicy plummy richness of the wine on your tongue is incredibly mouthwatering. The velvety texture of the wine complements the slow cooked lamb magnificently and a herbaceous undertone works with the rich slow cooked
sauce.

I can’t actually believe that this wine is just £7 a bottle in Sainsbury’s. Much less than an equivalent decent Rioja. But the good news doesn’t end there. There is currently also a ‘buy 6 save 25% promotion’ in place until Sunday, making it £5.25 a bottle if you buy 6 or more! Get in! Stock up for Easter and you’ve got Sunday lunch covered. 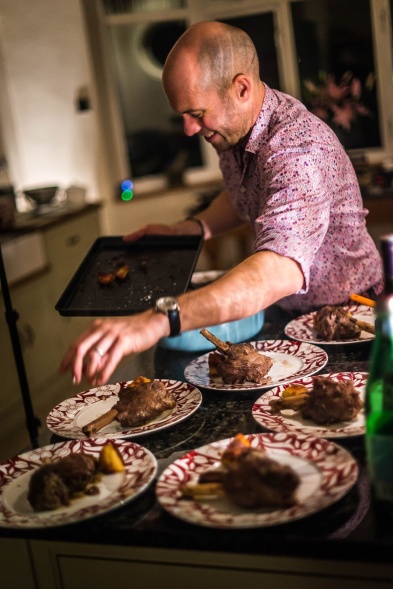 Large Sprig of Fresh Rosemary (I snapped off a small Branch!)

A Large Glug of Olive Oil

Water (Enough to cover the shanks)

A Tablespoon of Cranberry Sauce (Or Redcurrant Jelly)

A Dusting of Flour

A large pinch of Black Pepper

A knob of salted butter

Peel the garlic and chop finely, or mince using a garlic crusher. Chop the rosemary and anchovies finely and combine all the ingredients including the oil that the anchovies were stored in. Using a pestle and mortar, pummel all the ingredients together or you can blitz coarsely in a blender.

Make 4 deep incisions into each lamb shank and push a little of the mixture in. Rub the remaining mixture over the shanks and leave to marinate in a fridge for 12 hours.

Take the shanks out of the fridge and let them adjust to room temperature. Heat a pan and add the olive oil. Dust the shanks in flour and brown them in the pan to give them colour. (It’s probably best to do this 2 at a time)

Cut the carrots into quarters, slice the leek into discs and put them into a large oven-proof pot big enough to hold the lamb shanks. Add the bay leaves and the shanks to the pot and pour in the red wine. Cover the shanks in water, add black pepper and bring to the boil. (As long as the meat is covered, it doesn’t matter if the bone is sticking out.) Put the pot in the oven with the lid on for 3 hours. Check them after 3 hours and then put them back in the oven for a further 2 hours with the lid off.

After a total of 5 hou 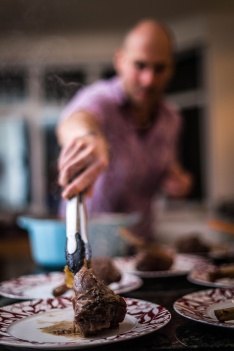 rs in the oven, take the pot out of the oven for the final time and leave the shanks in the cooking liquor with the lid on. This will keep them warm until the gravy is made.

To make the gravy, ladle out as much of the liquor as you like and allow the fat to separate. Discard the fat and add
the remaining liquid to a hot pan on the hob. Reduce the liquid by half and stir in the cranberry sauce. Strain the sauce then return to the pan and add a knob of butter.

To serve, place one shank on each plate and spoon over a little of the gravy. Put the remaining gravy in a boat so your guests can add more if they like.I like to serve my lamb shanks with roast potatoes cooked in beef dripping and steamed tenderstem broccoli.

Thanks to Paolo Ferla for taking the food photos during my shoot for Crumbs Magazine. Check out more of Paolo’s work on his website www.ferlapaolo.com