For the last few days I’ve had a plan and I’ve only just got a chance to put it into practice. In the spirit of opening the fridge and formulating taste combinations that I think will work, I thought I’d try something that I haven’t cooked before (even though it’s probably on the menu of every gastro pub in Ireland without my knowing.)

I am a big fan of chicken thighs and when I spotted the thighs I’d bought next to some delicious Clonakilty white pudding that my mother law brought over from Ireland (a weekend breakfast staple for Alan and I.) I decided I needed to put them together. Then, on the shelf above them I noticed some Parma ham staring at me. So I decided there and then that all three ingredients needed to go together.

Whilst I love meat on the bone, Alan isn’t so keen so when I found packs of 8 boned, skinless thighs in M&S, I had to buy them… Then when I realised it was 3 boxes for a tenner, my eyes really lit up! Perfect for freezing unless I eat them all before the best before date (which is a distinct possibility.)

So I decided to tweet a picture of the meal in the making and it got quite a response on Twitter, hence this slightly elaborate post for a dish made of three ingredients. (I blame @sewingyorkie & @dreamon!!!) So in response to some of the replies to my tweet, here’s how I did it:

For 1 person you need 4 boned sinless chicken thighs, 2 generous discs of white pudding and 4 slices of Parma ham. No need for seasoning. There is enough salt and pepper in the pudding and the ham. 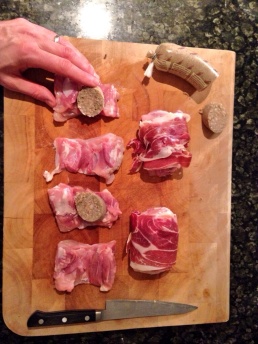 You basically use the chicken thighs like bread in a sandwich, the white pudding is your sandwich filling and the ham is the cling film you’d take the sarnies to school in! Lay 1 thigh on a board, place a disc of pudding on top, lay the second thigh on top and wrap in two pieces of the ham. Repeat the process again and that is enough for one person. I served it with greens and carrot & swede mash. Of course is it were the weekend I’d do some roast potatoes and maybe a little fricassee of wild mushrooms. 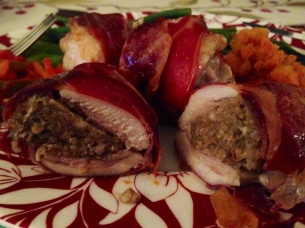 So how long did I cook them for? I used the Aga. I placed them in foil en papillote in the simmering oven for 15 minutes to retain moisture in the chicken and then uncovered for 10 minutes in the roasting oven to crisp up the bacon. I can honestly say that the chicken was so moist and delicious, I wouldn’t change a thing. I’ve stuffed chicken breast with sausage meat, wrapped in Parma ham before (in fact it was the first meal I cooked for my husband 11 years ago!!!) but this was definitely tastier.

If I were using a conventional oven I’d pre heat it to 180 degrees (170 in a fan oven) and probably cook for 8 minutes with the foil on and 6 with the foil off. But the trick is to always cut through the centre and check it’s cooked and piping hot throughout. But don’t over cook it or the beauty of these ingredients will be lost.

I honestly can’t wait to do it for a dinner party!… Ooh, but what wine to serve?!…