It was 11 years ago that I first visited California and I sort of immediately fell in love the wine scene. I was taken to Sonoma County and what I saw and tested impressed me far beyond what imagined. I’d only ever tasted the mass produced rubbish exported to the UK. I totally get that a lot of the good stuff stays within their boarders and we won’t see it unless we really make the effort to find it or if we’re willing to pay a premium for it. A great deal of British wine consumers are also more likely to be familiar with high end European wine than they would be New World, especially Californian. Why take the risk when good examples can be expensive and you’re only used to sugar sweet characterless mass produced drivel?

Since that trip in the spring of 2006 I’ve given a lot more thought to Californian wine and I will often try to seek out good examples here in the UK and across the pond. I came across a couple of great wines recently which re-ignited my interest in Californian wine and I wanted to tell you about them. (And this little exploration is perfect to whet my palate for the upcoming Golden State Tasting of Californian wines in London.)

Talley Vineyards are based in Coastal San Luis Obispo County, the Arroyo Grande Valley to be exact. The area has a long & mild growing season thanks to it having one of the most temperate viticultural areas in the world. Who knew? Well, the winemakers for one, who are pretty passionate and clever people. In this beautiful and unique area between San Fransisco and Santa Barbara, they use sustainable farming methods and deficit irrigation to maximise terroir in order produce their wines. Founded in 1986, the vineyards were created by the Talley family who were originally vegetable farmers. They saw the potential to grow premium Chardonnay and Pinot Noir on the steep hillsides above the farm. Today, their vineyards extend over 190 acres in the Arroyo Grande and their 2014 Chardonnay and 2012 Pinot Noir show what Californian wines are all about.

The Chardonnay isn’t one of those overly ripe smelling wines that often put s people off New World wines. It’s nose is delicately mineral with a hint of melon and an underlying hint of creaminess. On the palate, there is sophisticated flinty fruit, if that makes sense. There’s also a subtle nod oak which provides a beautiful texture. The wine has depth but also bright, almost gooseberry notes thanks to the fact that the juice from the hand-harvested grapes has been minimally settled in tank and then in medium toasted French oak barrels. The wine is typically bottled after nine months in barrel, resulting in this balanced white that would be perfect with creamy fish dishes or even good old fashioned roast chicken. 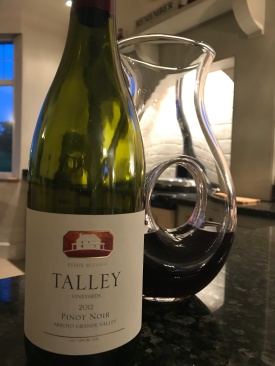 The Pinot Noir has a fresh pepperiness on the nose that you’d  expect from a Burgundy Pinot Noir, thanks to the traditional Burgundian methods in the cellar where the wine is put into medium-heavy toasted French Oak barrels. On the palate there is a symphony of savoury blackcurrants which are quite bright, culled with delicate and warming prune undertones. It’s smooth with an exciting spicy finish. Great if you’re doing steaks on the barbecue.

Don’t be afraid of spending that little bit extra if you want to give classy Californian wines a try. Push the boat out and taste a new world of good wine.

These wines are available via The Vineyard Cellars now and will shortly be on shelf at Hedonism in London and Butler’s Wine Cellar in Brighton, with at £28.00 per bottle.